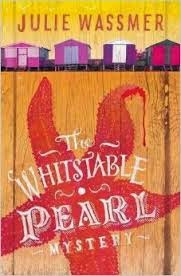 Summary from Little, Brown
Pearl Nolan always wanted to be a detective but life, and a teenage pregnancy, got in the way of a police career and instead she built up a successful seafood restaurant in her coastal home town of Whitstable - famous for its native oysters. Now, at 39, and with son Charlie away at university, Pearl finds herself suffering from empty nest syndrome . . . until she discovers the drowned body of local oyster fisherman Vinnie Rowe, weighted down with an anchor chain, on the eve of Whitstable's annual oyster festival.Is it a tragic accident, suicide - or murder?Pearl seizes the opportunity to prove her detection skills and discover the truth but she soon finds herself in conflict with Canterbury city police detective, Chief Inspector Mike McGuire. Then another body is discovered - and Pearl finds herself trawling the past for clues, triggering memories of another emotional summer more than twenty years ago . .

Nayu's thoughts
Cosy mysteries rule! That and I adore any shop based fiction. I loved the layers to Pearl's life. It was refreshing that she had a grown up son – in other cosy mysteries the heroine usually is single and without children. I loved how Pearl balanced two job, probably because at the time of reading it I'm juggling my day job, my book reviews, my writing, and my newly started crochet shop. I understood all too well the dilemma of which job needs priority. Her son is rather sweet, and plays a central role to the story. Pearl's mother is hilarious, especially when in front of customers. I like how Pearl's two jobs frequently collided, each bringing insight to the deepending mystery.

The clues stacked up high, and somehow I ended up being partially right about the murderer – I say partially because murder is never ever as straight forward as it seems. I'd tweeted that I was reading it & Julie suggested I make a note of who I think the murderer is at a certain page. Thankfully I saw her tweet before I got that far, so I did and smiled in my partial success. This is the type of story that I simply had to keep reading ^o^ Eager for book two which is coming out later in the year, not 2016!!