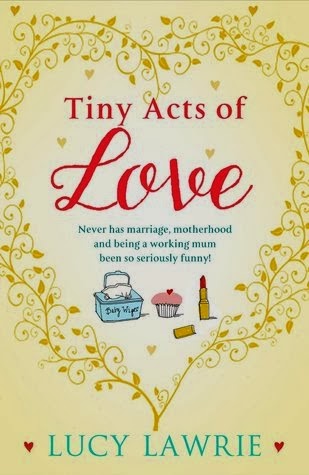 Themes: love, family, physical and emotional changes which come from having a baby, entertaining baby group, insensitive employer, keeping worries to yourself in a negative way, a stalker, a brush with the paranormal, helping people, being confused and distraught, hypochondria, not knowing what to do, and amazingly supportive husband and mother in law,
Content: very occasional strong language, doors shut adult relation policy, small amount of adultery, lots of humour, tissues needed

Summary from Black and White Publishing
Surviving motherhood? It’s all about having the right support network.

Lawyer Cassie has a new baby, a husband who converses mainly through jokes, a best friend on the other side of the world, and a taskforce of Babycraft mums who make her feel she has about as much maternal aptitude as a jellyfish.

Husband Jonathan dismisses Cassie’s maternal anxieties, but is he really paying attention to his struggling wife? He’s started sleep talking and it seems there’s more on his mind than he’s letting on. Then sexy, swaggering ex-boyfriend Malkie saunters into Cassie’s life again. Unlike Jonathan, he ‘gets’ her. He’d like to get her into bed again, too…

And on top of all her emotional turmoil, she also finds herself advising a funeral director on ghost protocol and becomes involved in an act of hotel spa fraud, never mind hiding cans of wasp spray all over the house to deal with the stalker who seems to be lurking everywhere she looks. Marriage and motherhood isn’t the fairytale Cassie thought it would be. Will her strange new world fall apart around her or will tiny acts of love be enough to get her through?

Nayuleska's thoughts
This book is a keeper. Cassie struggles with so much in Sophie's first year. I like how the way mothers can worry over nothing gets portrayed because, as Cassie finds out near the end of the book, there is a rational reason for the worries which gets blown out of proportion. Cassie was lovable with the worrying despite me not having a child or being married. I could relate to the impressive number of events she tried to plan contingencies for because I can be quite a worrier in certain aspects of life. You don't have to be a mother to enjoy Cassie's heartfelt story. I like reading stories like hers because it gives me a sense of what motherhood is like, including all the vomit!

I also felt close to Cassie in the way her closest friend moved away, leaving her with a gap in her life when they weren't in touch. Cassie didn't have her usual 'go to' person when times got tricky, which was a lot. However, it meant she learnt more about herself and the people she loves because she had to find another place for support, which enriched her life even more

I confess to neither approving nor understanding the way Cassie felt about her old boyfriend which for personal beliefs was why this book doesn't get full marks. There are some things that you just don't do in life, and Cassie did several. It's probably not what you are thinking either, I'm more of a marry instead of having boyfriends type girl, so the whole business of her seeing her ex was a no-brainer, and it caused misery and confusion. I adored Cassie's husband's mother, who had her own little plot which was surprising when revealed at the end. It provided quite a bit of tension and thrills too!

Suggested read
Another woman approaching motherhood for the first time is Catherine in Manic Mondays by Michaela Weaver (Fiction, 9/10E)